To some gamers it’s all about tournaments and intense competition. Increasingly my enjoyment from the hobby comes from a less frantic atmosphere. What could be better than locking the children in the garden, sending the wife to her small bore rifle practice and setting up a mini campaign for gentlemen to decide the fate of mini nations. I’m joking of course, the kids are lost to Fortnite babysitting services in their lair but the point remains, with De Bellis Antiquitatis it is quite possible to get three games into an evening. Our games were loosely based in Sicily around 1300 A.D. and looked to include a number of the plausible competitors for the island. It is a place and time which we often come back to and if you would like to know more, I heartily recommend Steven Runciman’s Classic, “The Sicilian Vespers”.

Our battles began with an Ottoman invasion. I adopted the high risk strategy of double ranking my Akinji light horse to gain an extra advantage. They were to fight Mike Lane’s Romanian Franks, newly arrived on Sicily in desperate attempt to curry favour with the Pope. I used my youngest son and a Fornit dance to try and distract the wily Christian hero from concentrating too hard… 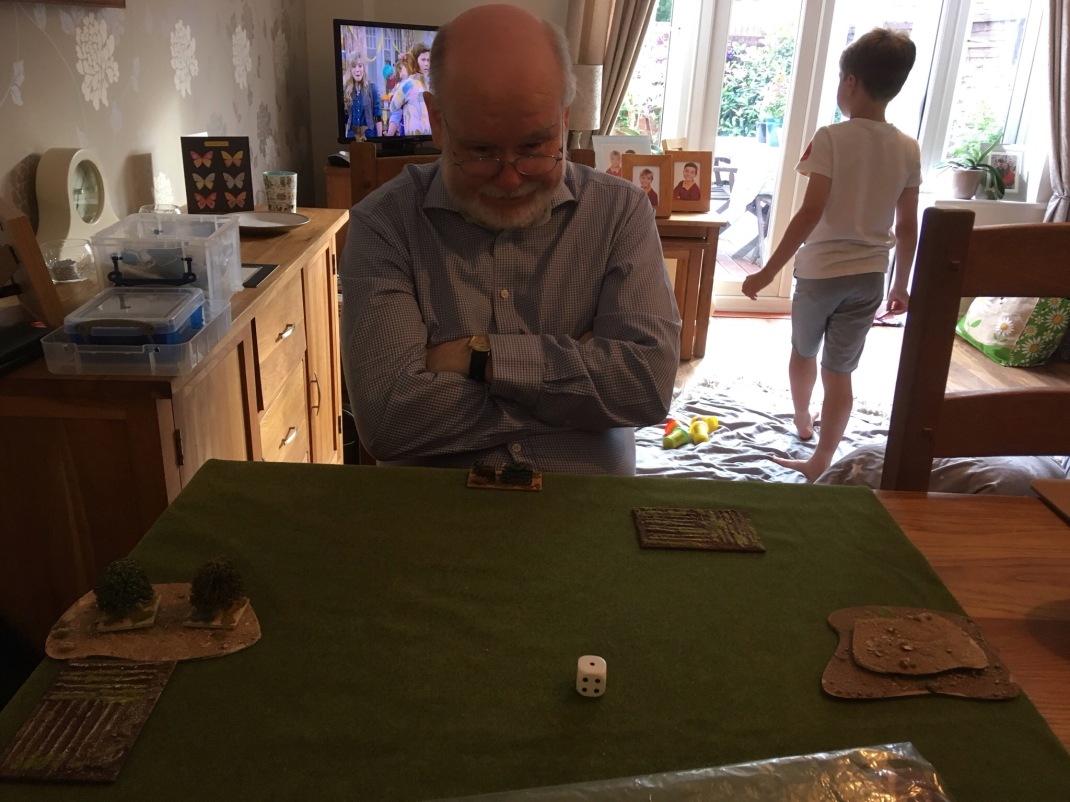 Sure enough, the flanks of the infidel appeared vulnerable to my light foot. I sent scouting parties forward to attempt to turn the Frankish flanks.

The arrogant Franks would not be disuaded  from their rash drive in the centre. The Romanian Frank list has enough psiloi to counter my brigands so it would be mounted battle that decided our fates.

The turbans and scimitars were losing in the unequal contest. By keeping on a narrow frontage the famous ( or infamous) charge of the knights was gaining ground. My only hope was to take out the Christian general, which took an age!

Only after three turns, double overlaps and a rear charge, did the venerable knight give up the fight and accept Ottoman supremacy!

The defeat of the expedition to Sicily had not cooled the martial ardour of the Romanian Franks though. The Catalan company still had a presence on the island and this was thought to be an easier nut to crack. The Company is one of my favourites – hence the total of this blog of course! It has solid auxilia as its most numerous troop type and they need terrain! Mike was in fine fettle, rolling high to get the more open terrain he wanted. I did get a steep hill and the forest beyond, so my battle plan was written for me by geography. My Catalans would fight through the terrain and only feint against Mike’s knightly host.

But, I was under estimating my piratical crossbowmen. How the Franks laughed as first one and then a second knight element fell to crossbow fire! To complete the discomforture, the almughavars came screaming out of the forest to carve up the Frankish light troops. Game two to me but Mike was undeterred- another Ottoman invasion but led by Lane Pasha! 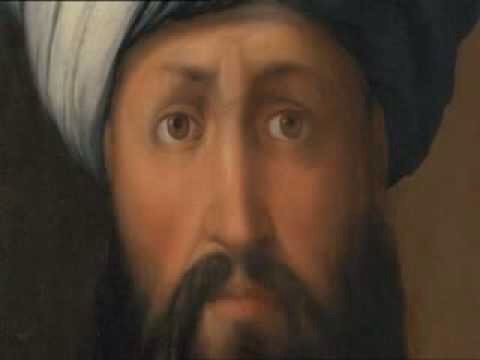 I chose the forces of the Venetian Republic and the ever resourceful Doge had invested in cannons, my favourite element! 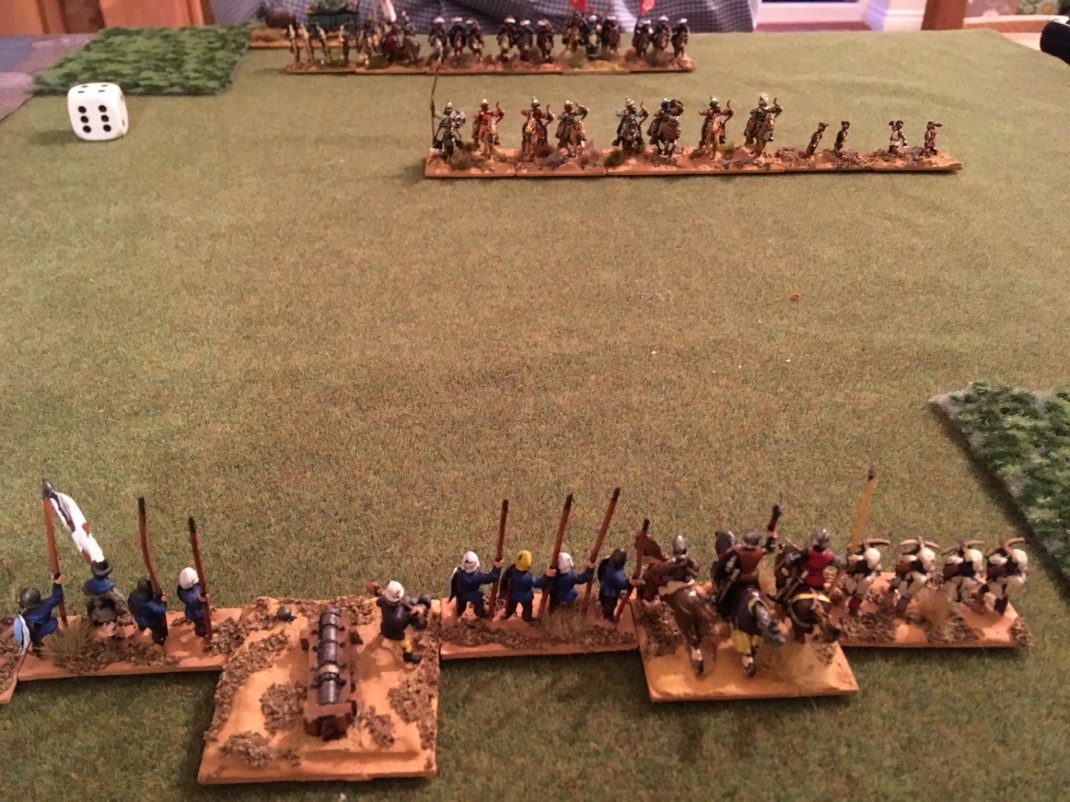 However, the Ottomans did nor fancy facing the new terror weapon. Rather the skulking Musselmen skirted the marsh to envelope my flank. I was too slow to react, the curry was beginning to dull my senses, they descended on my Knights like a tramp on chips!

My Condotta general was first to fall, not that the Doge would have spared him if he had indeed returned to Venice. Command and control was now even more confused for the Republic. More and more Siphahis and fewer and fewer elmetti! The Knights in mercenary pay made a poor showing! Fortune’s favour had turned! Even a dice roll of one was enough to tip the Venetians into a rout!

So Mr Lane had won the final battle and all that promise of bragging rights of a white wash of the veteran commander was dashed. It had been  a great evening and we left the table discussing which theatres we could fight over next time, always a good sign for the lead addicts! Thank you very much for following our battles, back shortly with the details of Virtus 2019 and more holiday painting. And well done to Mr. Lane , may his turban always be bulging! 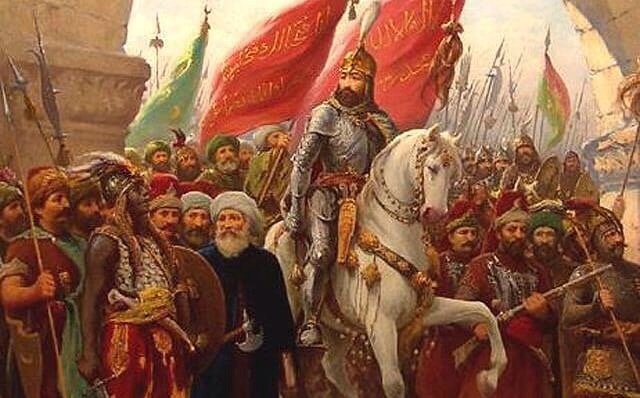