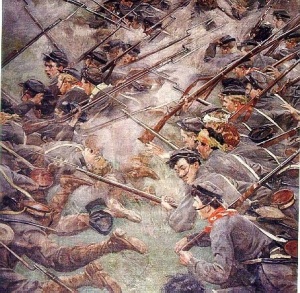 If you want a fast paced game, that can deal with multiple players, then Black Powder from Warlord Games is the rules set for you. It isn’t for the micro-manager, nor the trainee accountant but it is a lot of fun. The authors actively encourage “tinkering” and so while we await the definitive supplement, South Wales Wargames Collective offer the following rules to add a little more “flavour” of the War between the States. If you have tried any other period amendments, we would love to hear from you……… 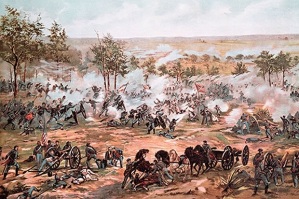 Worm Fences– Easy to build in forested North America but difficult to classify. Makes troops seeking cover an “unclear target”. One or two fence horizontal poles are not enough cover to affect saving throw. Wooden fences on top of rocks and stoutly built “worm fences” allow infantry and artillery behind, to re roll one failed morale save from  each unit firing at them. This may be combined with other special rules provided no single dice can be re-rolled more than once.

Open woods and orchards– these block line of sight over twelve inches. Troops in these area features are”not clear” targets and add +1 to morale rolls.

Forests– reduce visibility to six inches. Plus one to morale rolls and reduction to half speed of troops. Note ACW troops do not have to adopt skirmish order, they are quite flexible in such terrain. Units in forests are “not clear”.

Passage of the lines. This involves the characteristic successive waves of troops literally “passing through” or interpenetrating the faltering front line units. Troops in the ACW feared this manoeuvre due to the potential for confusion and the bunching of troops in front of enemy fire. It takes a whole move to interpenetrate.

Charge/support. If multiple units are given the charge order then they will do just that! All units so ordered will attempt to make contact with the enemy unit or units indicated. If you wish troops to “support” a charge then they have to be ordered separately from the “charge” order. This will make charges from outside of the initiative distance quite risky as you supports may not of course be as enthusiastic!

Shaken troops cannot support. Troops from different brigades can support each other.

We have tried giving Union units “first fire” ability. The idea was to reflect the superior logistics of the Northern armies. This needs to be used with some caution as it does make these troops a big advantage.

Rifled Artillery- field guns have a range of 72 inches.

Prone. By “prone” I am assuming that the troops are seeking cover and are not concerned with parade ground order. Rather, the troops are seeking shelter from artillery behind any piece of cover available and/or lying down. The firing artillery must be at medium or long range. Artillery hits against prone troops must be re-rolled. Troops must be ordered to leave the “prone” state and will lose six inches from their first move as they prepare to move off. If caught by charging enemies, whilst prone, troops will suffer a minus one modifier.

A brigade is broken when over half its units (omitting small units and batteries) are shaken or destroyed. This is to reflect the appalling causaulties that both sides were capable of withstanding.

The ‘watch your dressing’ rule. Watch out for this one, I suggested this on the Warlord forum and got a bit of a trolling! One of the most controversial rules, for those not used to Black Powder, is the ability of moving troops to cover 36 inches if foot, or 54 inches if cavalry, in a single ‘turn’. Whilst this does have the desirable effect of getting reserves into the game at a rate of  knots, I believe that to allow such Olympians to fire unaffected is a little ambitious. So, I suggest troops that move and fire once are unaffected, troops that move twice receive a plus one modifier to hit. Those athletes who charge or move three times, are penalised by a plus two modifier to hit and a plus one to hit modifier in hand to hand combat. See what you think?

Blinds- apologies but I have stolen this shamelessly from Principles of war. Brigades are replaced by pieces of cards, some of which are “dummy’, they contain no troops. The ‘blind’ is removed in the turn after the enemy come within twelve inches. Whilst covered by the blind, the brigade moves at a command rating that may or may not reflect the quality of their commander. This allows well commanded troops to pretend to be unenthusiastic militia and vice versa.

To be continued………… Thoughts and suggestions most welcome. Many thanks to the “Contemptible Wargames Club ” for many great ideas. Army lists by year and theatre are currently being researched by our crack team of experts. 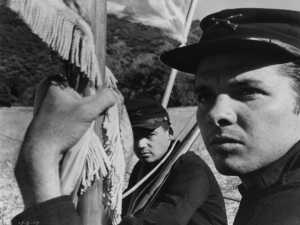