Verb: Doing a Meghan……..definition: ignoring or dropping past friendships after becoming famous

Well one of the above should now be a thing of the past! Over a year ago I was extolling the virtues of the new range of Games Workshop paints. Add a light undercoat, paint in ” base” colours that really do cover well. Use GW washes to add depth, followed by “highlights”  – again pre-mixed and all ready for detailing. Well now GW it would appear has gone still further in the battle against shiny unpainted miniatures  upsetting those with a concern for presentation. 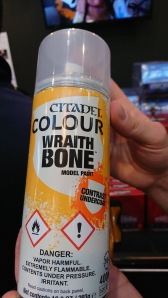 The base coat is either bone or light grey. There is a large range of ” contrast” paints that are added to the miniature and , wait for it, no other layer is needed! The “paint” is rather a mix of pigment and wash that covers the base coat but, is also oily enogh to define depth and raised areas. Clever heh?

The most widely circulated advert is above. The older triad of paints is on the top row. Although three stages are on the lower row, the technical paint would appear to be the basing terrain. I’ve got to admit I’m excited. Huns and steppe nomads would appear to be an obvious choice but the new paints will also include metallics so I may finally get around to that Wars of the Roses army.

I have some Arab camel riders to finish this week using washes but my next army will definately be to test this exciting development. The miniature below ( historical gamers look away now) would certainly not embarrass any collection. Great days may lie ahead, despair not, the lead pile may disappear as fast as a Conservative votes in an election.

More news as soon as I can get my hands on some paints. Now miniatures were hurt in this article. Thoughts and comments always welcome…