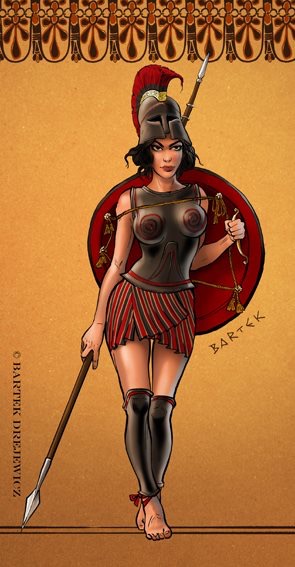 1).The Antigonid line left to right – that is some Phalanx! With Rodger, the games organiser studying his Armati measuring sticks.

Saturday 7th April saw the Sycamore Hall in Bletchley crowded with the great and the good of Ancient table-top warfare. In fact, the SoA boasts a membership that has included such notaries as Donald Featherstone, Phil & Sue Barker, Trevor Halsall, Adrian Goldsworthy, Roy Boss, Rick Priestly, Phil Sabin and Duncan Head and many, many more (including myself of course).

Yes – once again it was the annual SoA Battleday event, and this year it was ‘the’ Hellenistic phalanx pike-fest of all time, as two of Alexanders Successor generals – heavy weights of the ancient world – Antigonus I Monophthalmus (or old ‘One-Eye’ to his chums) and Eumenes of Cardia fought it out head-to-head on a dusty plain near Isfahan in Iran in 317BC. https://en.wikipedia.org/wiki/Battle_of_Paraitakene

For those of you unfamiliar with a SoA Battleday, the idea is simple, every year, 12 months in advance, an ancient or medieval battle is selected by the organiser (Richard Lockwood) and a request is made to the membership to put on demo-participation games to represent this battle. It can be portrayed any scale of figures (in fact even the use of figures is not obligatory – role-play type entries, board and card games, even computer games have all been used in previous years). Your battle can be fought using any set of rules. The wider number of different rules sets used generally the better. The only common factor is that the game must represent the selected battle or part of that battle or the campaign running up to and including the battle. 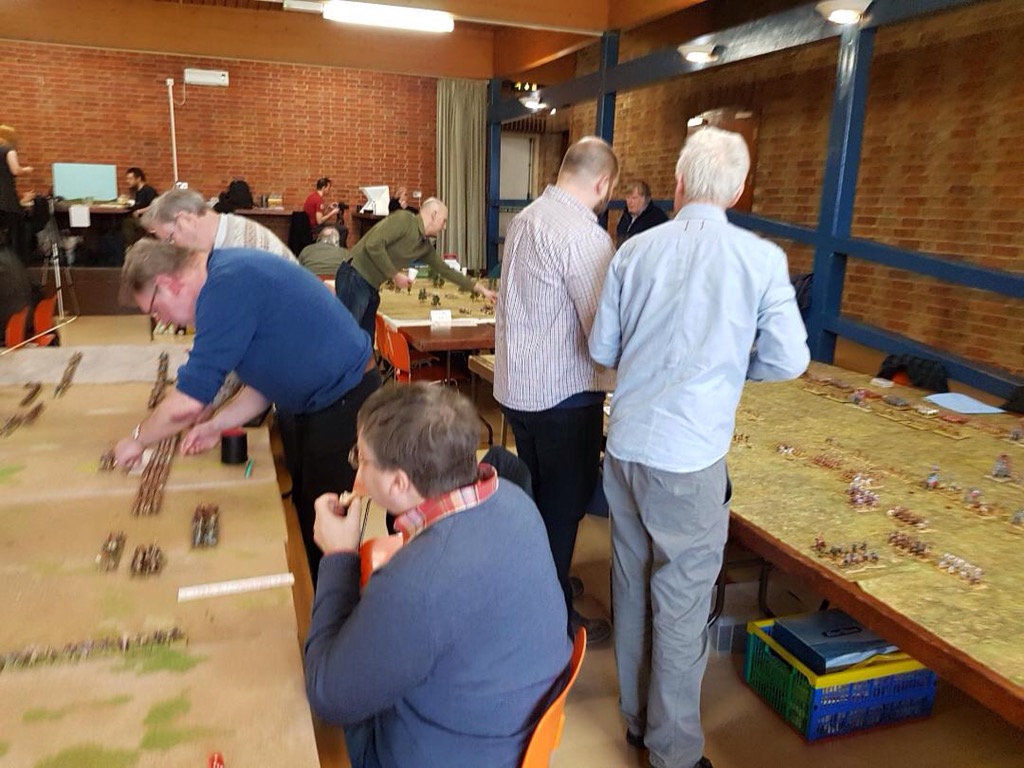 This year there were 15 different games on offer, playing to a number of different rules sets including: To the Strongest, Ancient Battles, Hail Caesar, DBA, DBMM, DBM, Rameses, Armati, FoG, MeG, LaDG (and many others I failed to note down). The scale of figures used ranged from 2mm, 6mm, 10mm, 15mm through to 28mm. Participants at the event (who do not necessarily have to be SoA members) are encouraged to bring along and run a game or to simply turn up and join in a game and take a command. And as with previous years we had contingents from France and Italy putting on games alongside UK regular participants.

This year, as so often previously, I chose to join in the Armati game which was magnificently pulled together by Berkeley Vale’s very own Martin Sorrell (in-joke) Rodger Williams. Terrain was supplied by Mark ‘Capability’ Craddock, who has won Best Terrain prizes in a number of previous Battleday events – although this year’s terrain was not that demanding – being a flat open dusty plain with a set of steep hills along part of one flank. However, we were fighting on an 8’6” by 4’3” foot table so a considerable number of troops were required. Rodger had selected 15mm as our game scale and the troops used came from Rodger’s and Mark Craddock’s barracks, supplement by a massive contingent from the copious armoury of Roy Boss (the SoA Chairman).

4). A view of the fully deployed Antigonid line from Game:1

5). The full Game 1 deployment – showing the historically accurate overlapping flanks (my command at the bottom of the picture) 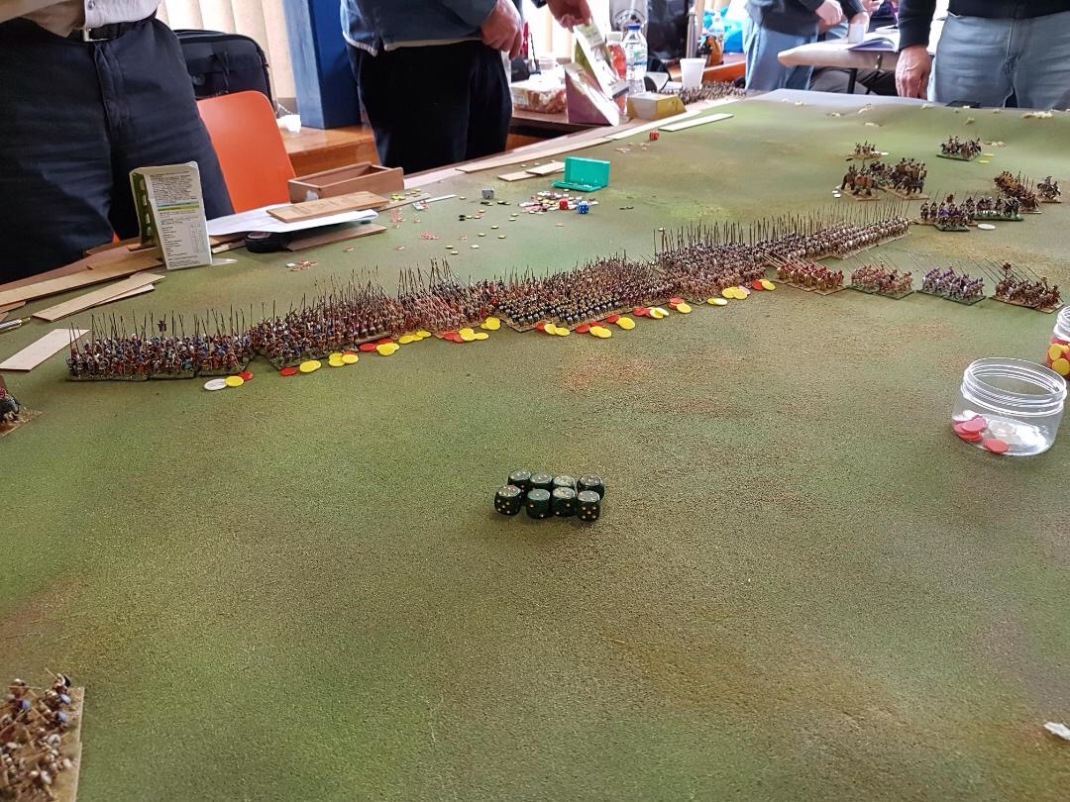 6). Push of Pike! Red markers are casualties, yellow are fatigues, white indicates disorder.
Historically the battle is one which was won by push-of-pike and Rodger’s interpretation replicated this well, with an emphasis on the different types of phalangites deployed by each side. Unlike many other sets of rules Armati is well suited to this as it allows many differing fighting values for units based upon their quality. So the Silver Shields (or Guard phalangites) might fight with a fighting vale (FV) of 8, whilst the bulk of the rank and file would use an FV7 but the poorer quality conscript pikemen would fight on an FV5 (so significant differentials in combat). Armati also plays quickly – with long missile and movement ranges and a deadly combat system, where a drawn combat results in a casualty for both participants. As such we managed to complete two games on the day, both to a decisive conclusion, where as many other games didn’t even complete one.

In game one I was running Antigonus’ weaker left cavalry flank. This is a challenge as my force was composed predominantly of lots (10 units) of mostly javelin armed Light Cavalry – not exactly game winners in any set of rules unfortunately. However, in Armati in the Hellenistic period they have one distinct advantage, which is that they are counted as ‘expendable’ or non-key troops. So they do not count towards building up the army break point, but equally if lost they do not cause any negative impact either. This represents their use in Hellenistic battles and the fact that they were primarily designated to provide skirmish screens. They are however ‘chocolate fire-guards’ in frontal combat against a wing of top quality Heavy Cavalry – which is exactly what they were facing.

In addition, I only had a few evade moves available to me before I was running off the back edge of the table, so I needed to employ a combination of phased suicide charges, evades and rapid enveloping moves to try and enable flank or rear attacks, where I was on a more even footing in melee. I also needed to pelt my enemy with javelins on every occasion so as to further even up the odds. As it happened fate was on my side and by leading a couple of HC a merry dance down the outside flank of the battlefield, throwing javelins as I went, my remaining LC swarmed around the core of his HC and got around their rear forcing him to about face. Thus, my objective of holding his advance and preventing him falling onto the exposed left flank of the main Phalanx was achieved.

In game two we swopped sides, so I played my opposite number leading the opposing Eumenid right flank heavy cavalry command. It was now my turn to turn the tables and I managed to destroy the majority of the enemy LC in a rapid mass frontal charge and I even took down a couple of conscript pike units, which were swept away by routing friendly LC (in Armati any unit in a 3 inch path directly behind a routing ‘massed’ unit – and all cavalry counts as massed –must make a D:6 roll and on a score of 1 the unit route through routes itself – so I was lucky twice!). However, a single unit of Antigonid HC managed to sneak past my LC screen to fall onto the flank of the Eumenid elite Silvershields, which were already in combat to their front, which in Armati is inevitable instant destruction! Hey ho. 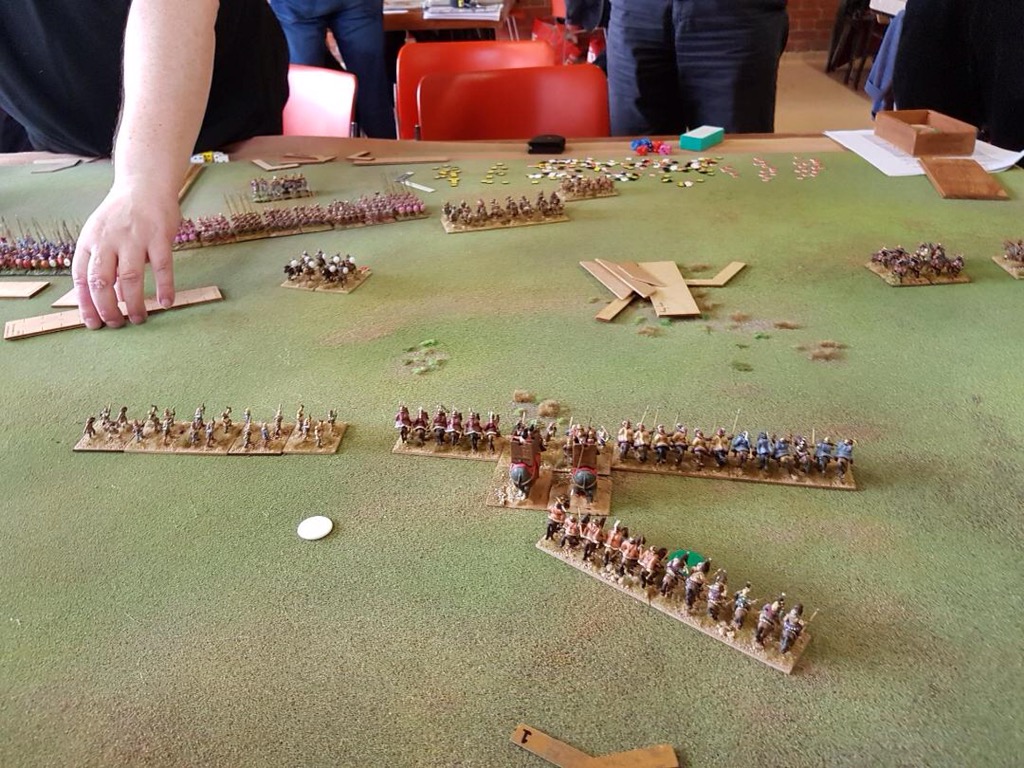 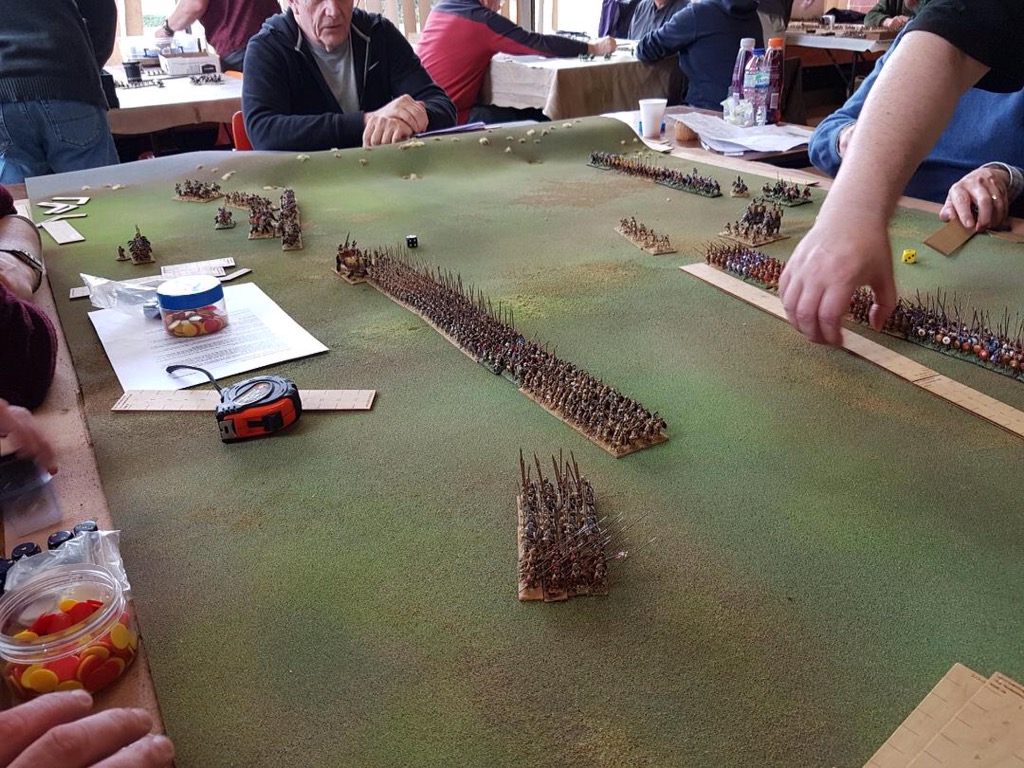 10). A view of the Eumenid centre and right flank deployment from the left wing (Game 2)

Historically Eumenes lost the battle to Antigonus and in our refights despite a stoic resistance in both games, it was all decided in the centre where the massive Antigonid phalanx was so very difficult to beat frontally, so our outcomes were historically correct with two Antigonid victories. 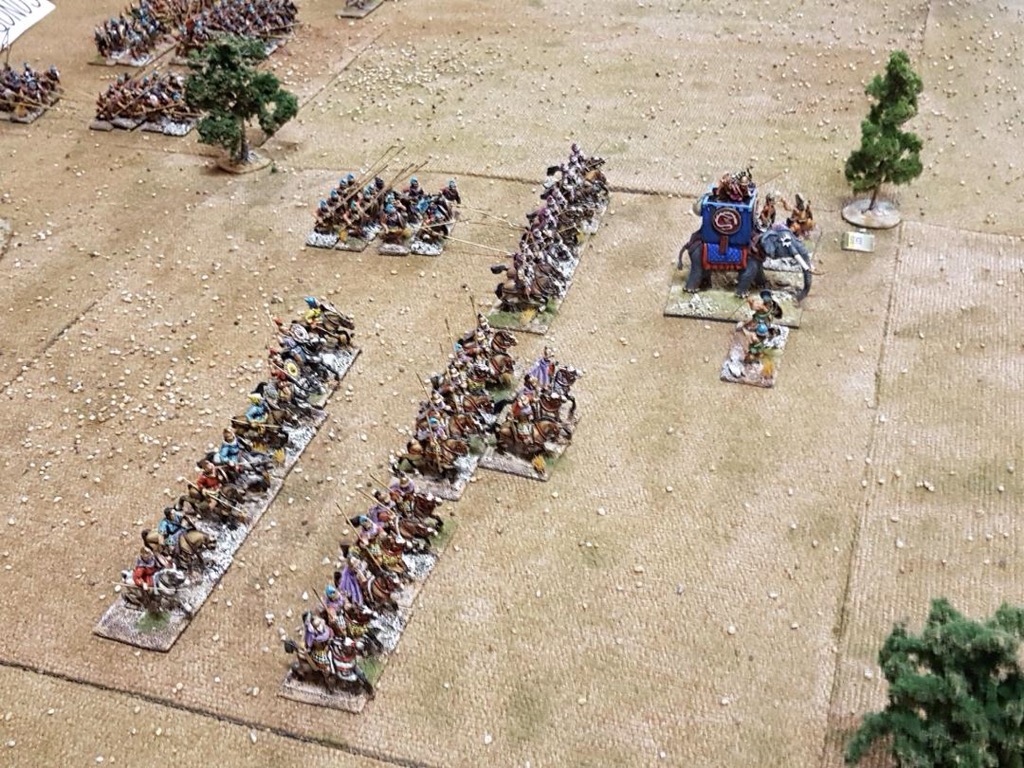 12). 6mm can look really impressive – but re-spearing all those cast pikes with wire is a true labour of love!

13). Another 6mm game – you certainly get a lot of troops for your money

14). One of those rule-sets with fancy dice and markers (not sure which) – but it certainly looked impressive in 20mm.

Two really great games – hugely enjoyable. Many thanks Rodger for organizing it all – and another great Society of Ancients Battleday.

Next year’s game was also announced and it will be Telamon – so Ancient Celts v Republican Romans in 225BC (get out your Gaesati “oh err missus!”), https://en.wikipedia.org/wiki/Battle_of_Telamon

Unusually, the following year’s battle theme was also announced – which is to be Bosworth (in 2020). Great news for all of us later medieval fans – maybe a 28mm game is the answer.

If you can make it next year do come along, bring a game, come as a club or just turn up, participate and enjoy this marvellous wargaming spectacle. You can find out more or even join the Society of Ancients by visiting their website at: http://soa.org.uk/joomla/ . The quarterly magazine alone is worth the annual fee. 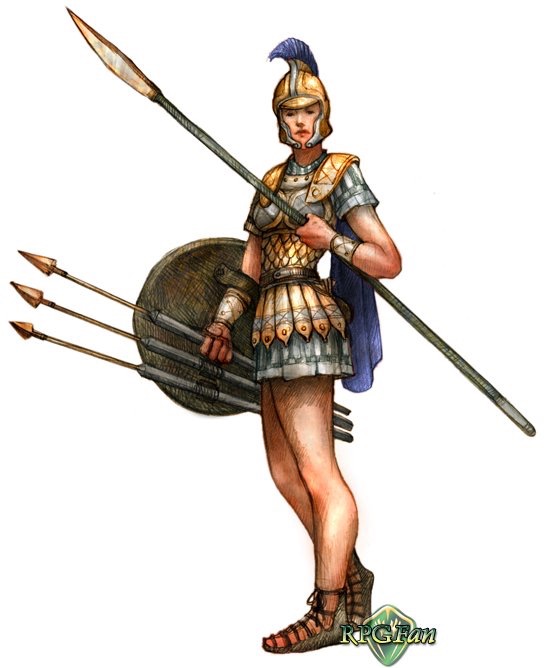 More from Mark this very weekend as he recreates Jutland in Berkeley canal centre on Saturday and fights yours truly on the Sunday, somewhere North of the Wall!
Thanks Mark, superb coverage! (Ed.)