I really can’t take claims that elves with lazerguns or Lord Sigmar the medieval spaceman have anything to do with ‘Wargaming’. Being nearly fifty years old I must be one of the few wargamers who never played Warhammer 40K.

The attractions of Fantasy gaming just passed me by…..

Terry Wise’s “Introduction to Battlegaming” got me started when I was about twelve. Then the Airfix Guide to the ACW but proper wargaming started when I was in my mid-twenties with De Bellis Antiquitatis. On just a few sides of B5, you had the complete rules, a campaign system and literally hundreds of army lists. Set up costs were minimal with a two foot square playing area and a maximum of around fifty usually 15mm figures. I started with the Punic Wars and JonG started planning his Alexandrians. D.B.A. grew into De Bellis Multitudinis and I was hooked. It was only really when another sea change resulted in Field of Glory that I left Ancients behind and concentrated on World War Two and Flames of War. Now, over twenty years later, D.B.A. Is back with a smart make over and I’m smitten all over again. And, John Gallacher is still at the bloody planning stage of Alexandrians!

Using techniques honed on the card table, JohnG adds more figures than the measly twelve elements that the rules “suggest”!

Don’t be put off by the rather basic terrain that we set up, many players create miniature masterpieces. The games’ great strength of course is the way it plays. We played for a little over forty minutes including JonG’s lame attempt to chat up an alluring female role player!

In five minutes the table is laid out and Jon’s Switzers are deployed. Very subtle but what do you expect with the Swiss

My choice was the French; powerful Gendarmes and a good range of supports. 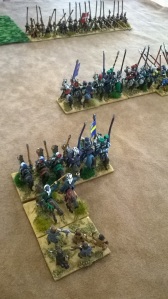 Ten minutes in and the Swiss have careered forward! I wasn’t expecting Mr Careful to do that. It must have been the influence of the young lady? 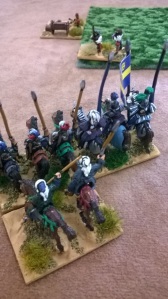 Would I have time to destroy Jon’s light gun and isolated flank before I was rolled over?

The answer was no! Pikes proved to be extremely resilient.

I thought I had him with a flank attack from my poor FRENCH pikes ( classed as hordes! Alors!)

It wasn’t to be. His pikes destroyed the flank assault and then proceeded to completely decimate the French horse. I didn’t even have time to sneakily loot the Swiss baggage!

One move away from a treasure trove of Cuckoo clocks and cheese!

Jon and I both thoroughly enjoyed ourselves with the new improved DBA. The fine-tuning has renewed my interest. Movement rates especially have made a difference and reward aggressive play. Legoland beckons for the next few days but my Summer project was bought the day after….

I’m still not attracted to fantasy role play by the way!

Keep reading on the weekend to take part in Despertaferres’ latest development, a DBA medieval campaign!