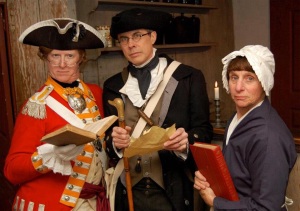 So I had my new toys. No messing around with layer shading and washes. A limited number of matching colours and any complicated detail gets left off. I was ready………..Like all those used to setting ambushes, the forest was to be my friend. My enemy couldn’t shoot what he couldn’t see. My two hundred points in Muskets and Tomahawks gave me a Sachem leader, two units of Indians with muskets ( scouts and natives), plus my assault units of two five man teams ( bloodthirsty). I also made one of these Irregular so that I could benefit from more potential activations. The game is card driven so this was to be important.

The Forest, friend to Indian and Ewok…… 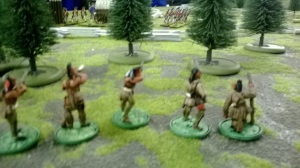 Hopefully we can see them but they can’t see us.

The scenario was a simple one, The Redcoats had to get from the fort and off the end of the road. My war band had to stop them.

My opponent Ken had just two units to defend the wagon. One unit of nine light infantrymen and a whole ten man unit of troopers. My original plan to use the forest would appear to be correct. I didn’t rate my chances against experienced regulars in a firing line.

Newly painted and thirsting for glory!

The plan was to block the road with a screen formed of one of the teams with the better shots. Meanwhile my veterans were to distract the column and generally slow the Redcoats down whilst my other six man unit tried to get behind the slow moving British. 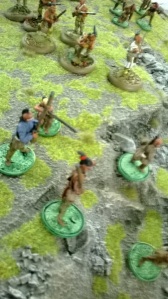 Hate and loathing moves swiftly through the forest…

We score hits but no casualties!

The roadblock is working and the column halts. The Indian Sachem wants to preserve his Braves but newbie Chris arrives at the table and questions their masculinity! One charge later and the veterans are wiped out! 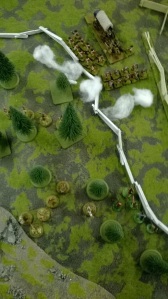 But, the card are changing…..there are now two units of Redskins pouring fire into the head of the column and what is more, the flanking force is ready to charge! 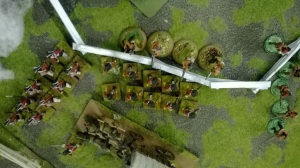 If fire combat is handled well in these rules, the hand to hand phase is shockingly brutal. Ken’s regulars got hit from behind and when forced to retreat, only two escaped to the safety of the wagon. More savages set fire to the supplies and it was game over….not quite though, a whining little voice from the other side of the table decided now was the time to question whether indians moved six inches in woodland. Helpfully he then went on to describe how he had caught others in the club cheating…….. 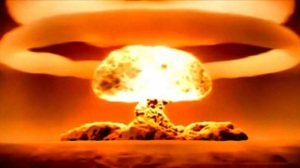 It wasn’t pleasant but sometimes people need to be told some home truths!

My thanks to Ken for another great game. Apologies to anyone within earshot of my impromptu counselling session. Next Thursday is Lions Rampant with some of the Taffs Well boys so keep reading….what could go wrong?